Who is an Everyday Hero?

An Everyday Hero is someone who is well-trained and confident enough to use their life-saving skills when called upon in the community setting. They are lay providers with basic training and off-duty professionals who come to the aid of a stranger or loved one.

The Everyday Heroes listed below are recipients of EMS Safety’s SHINE Award. It’s presented to a rescuer by their Instructor in recognition of his or her actions during an emergency. SHINE stands for: Special Helper In an Emergency.

Do you know someone who deserves a SHINE Award?

The recipients below were recognized for responding during an emergency, and for using the skills learned in their training course. 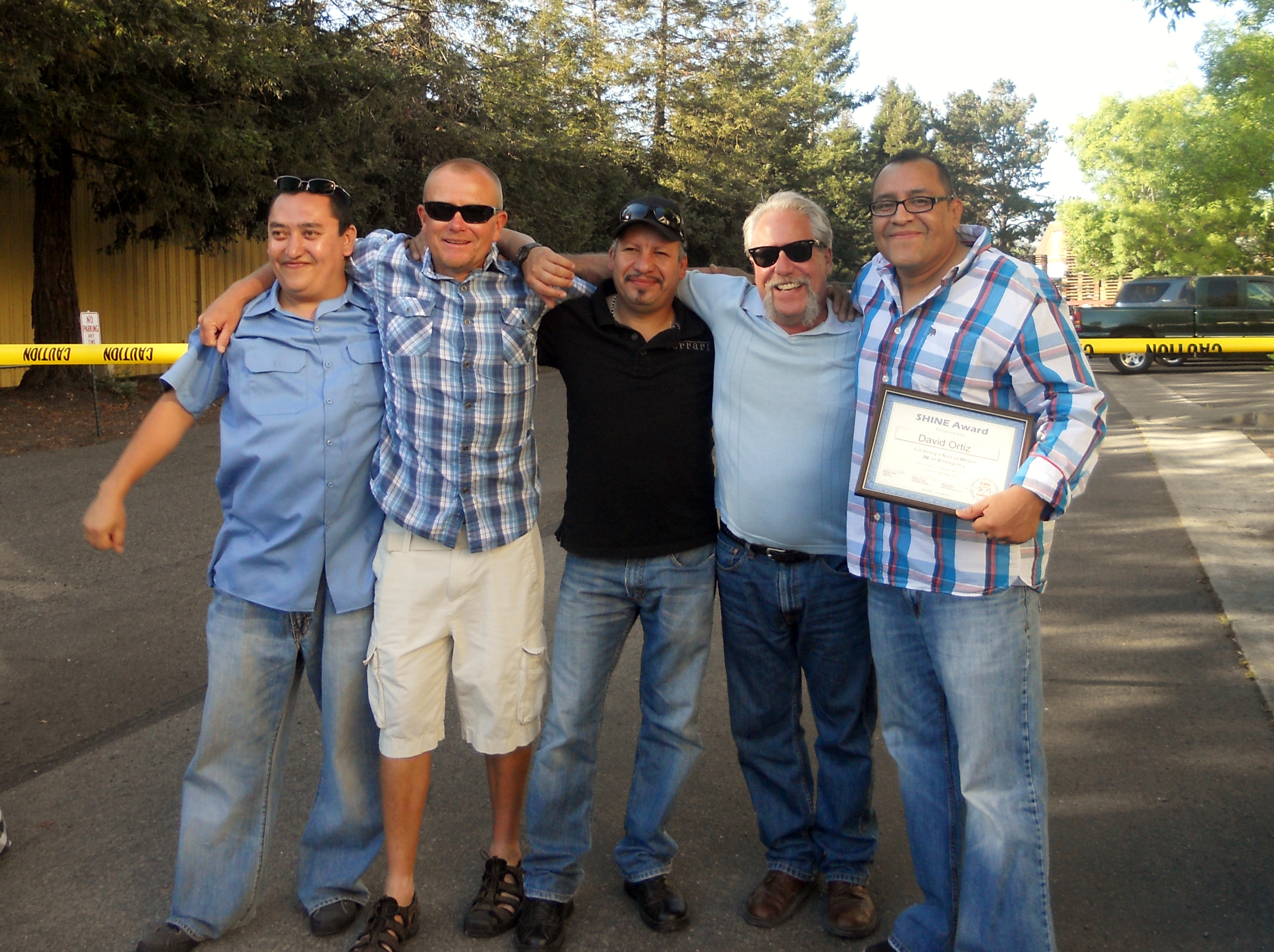 While at work at Bibbero Systems new location in Sonoma, CA David witnessed his manager collapse.

He quickly began CPR and continued until EMS arrived. There was a delay in response time due to another emergency and David did not stop for more than 10 minutes!

Paramedics and staff at Queen of the Valley hospital credit the successful resuscitation and the manager’s full recovery to David’s actions.

Dominic Tedesco witnessed the accident that led to the CPR in Rohnert Park Costco parking lot.  He called for help and made sure 911 was called.  He assisted his fellow co-worker as she performed CPR and he helped the paramedics move the individual into the ambulance.  He remained calm and ready to help.  It was evident that his training gave him the confidence to get involved!

Betsy Penn responded to an emergency call and proceeded to perform CPR on a member in the Rohnert Park Costco parking lot. She provided strong compressions until Sonoma County Life Support arrived. She instructed co-workers so that they too, could be useful and then she assisted the paramedics as well. Betsy is an excellent leader and a great example to her co-workers.

Jacquelyn Sprague responded to an emergency call and assisted co-worker Betsy who performed CPR. Jacquie made sure 911 was called and then remained at the scene to assist Betsy if needed. She knew Betsy was trained so she was ready to assist and help however she could.

David, an employee who was trained in CPR at work, was at home when he received a frantic call from his neighbor’s wife. She needed help with her husband who was having severe chest pain. When David arrived, the husband was unresponsive. David started CPR and after a few cycles the patient’s internal defibrillator discharged, he regained consciousness before the EMS arrived. David’s quick actions that he learned from the training he received at work proved to be a life saver, keeping David’s neighbor alive long enough for his implanted defibrillator to do its job.
Submitted by: Phillip Follis of the Indiana Department of Transportation

An employee was slumped in his wheel chair. Michael, the company Instructor, and his team of responders arrived. The victim was unresponsive, 911 was called and Michael and his team assisted with CPR and continued non-stop for around seven to eight minutes until the EMS arrived. As of today the victim is in the hospital awake and in good spirits. The Doctor on duty stated that without the efforts of the trained bystanders the victim would not have made it…Michael credits his team for being calm and remembering their training
Submitted by: Carl Dougherty of Public Safety Training, Inc.

Raphael witnessed the sudden collapse of an adult victim while shopping inside a retail store. The victim was not breathing. Raphael and another bystander performed CPR until professional rescuers arrived. The victim was successfully resuscitated.
Submitted by: Rafael LaRocca

The staff at US HealthWorks, East Edinger Office, responded quickly and as trained to the sudden cardiac arrest of a physical therapy patient. The staff coordinated starting CPR, calling 911 and the use of an AED all within minutes of the victim’s sudden collapse. The AED delivered a life-saving shock and the victim was successfully resuscitated by the staff before the arrival of professional rescuers.
Submitted by: Sharon Henkel of US HealthWorks

Sylvia interviewed the victim and insisted on calling 911. Her recognition of Heart Attack symptoms and quick actions surely saved his life. Later that day he was diagnosed with a heart attack and admitted to the hospital for treatment.
Submitted by: Dave Right of Emergency Safety Training

While working at Costco, Raphael came to the aid of an unresponsive victim. The victims was not breathing, and it was discovered that her airway was blocked. Raphael cleared the airway and provided CPR until the arrival of professional rescuers.
Submitted by: Michael Ortelle of Safety Pros

Terri, a school bus driver, pulled her bus up to the local elementary school. She heard cries for help, and was told that a lady was unresponsive. Terri responded and found that an elderly woman, who was picking up her granddaughter from school, was down and not breathing. Terri and the school nurse, who arrived at the same time, did CPR until the fire department arrived on scene. The grandmother was transported, successfully resuscitated, and later diagnosed as having suffered a sudden cardiac arrest as a result of a heart attack.
Submitted by: A. Kuramoto of Valley Safety Training

Linda’s mom was babysitting a 10-month old. Linda recognized a choking emergency when she noticed that the child was responsive, but blue and apparently not breathing. Linda applied the skills she learned in a participation course. On the third back blow, a chunk of candy was expelled, and the infant was able to breathe. A month earlier, a similar situation occurred involving a two-year-old. Linda was able to expel the foreign object with the skills she had learned in her course.
Submitted by: Kevin Johnson of Geyserville Middle School

Forrest’s mom was choking. She was about to run out the door and down the street for help, when Forrest asked her what was wrong and recognized that she was choking. He remembered what he was taught in his CPR and First Aid awareness training at school. He also remembered advice he received from his grandfather, a retired firefighter. Forrest performed abdominal thrusts on his mom and expelled the foreign object, saving her life.
Submitted by: Tony Hidalgo of RSM Water District

Sam’s 10-year-old brother was eating a hot dog, when he stood up and looked very scared. He was flailing his arms around. Sam asked if he was choking. He nodded yes. Sam performed abdominal thrusts on his 10-year-old bother, and a ‘huge’ piece of hot dog fell out of his mouth onto the floor. Sam saved his brother’s life that day.
Submitted by: Andy Kuramoto of Valley Safety Training

Joseph was driving down the coast when he was flagged down by a woman. The woman’s three children had been swept away by a wave. Her husband had rescued two of the children, but didn’t come out after going back for the third. His body washed up on shore, and Joseph immediately began CPR. Tragically, the husband did not make it, and the third child was not recovered. Joe’s actions were commendable, even though the victim did not survive.
Submitted by: Kendis Wilbourne of First Aid/CPR Services

How Does an Instructor Give the SHINE Award?

Has a student ever told you about a time when he or she used the skills they learned in your EMS Safety course? Now you can recognize them with the SHINE Award. It’s a great way to make someone feel proud of their actions, encourages others to act, and is perfect for public relations.

To issue the SHINE Award, fill out the Rescuer Narrative Form and fax or email it to EMS Safety. Have questions? Call us at (800) 215-9555 or email info@emssafety.com.