“The compressions you did saved her life.” Those are the words Jeff Hundley was told the morning after he performed CPR on a 16-year-old girl. He is the hero he never imagined he would be.

Jeff completed his EMS Safety CPR/First Aid Instructor training with the Tennessee Department of Children Services in October 2016. Almost two years later, in July 2018, he put that training to the test. His words are more powerful than anything we could ever write. So, here they are.

“We had a baptism at a pool of one of my church members. The baptism was over, and a couple of the teenagers got in the water to just cool off. After a second, we noticed one of the teens at the bottom of the pool. I was standing right over her. Someone immediately went under to pull her out, and they placed her on the concrete. I knelt down beside her and just started CPR. We were a little out of town, and it took 20 minutes for the paramedics to arrive. I administered compressions for what seemed like a lifetime but was around 20 minutes. She was blue when they took her out of the water. She did not revive, and I just kept going, crying, and praying all at the same time. One gentleman took over breaths for me, and I just stayed on compressions. I was very aware of how deep I was pressing, but I didn’t hear any ribs cracking and just kept going. The paramedics arrived and took over for me. They got their AED and administered a shock. She had a pulse!” 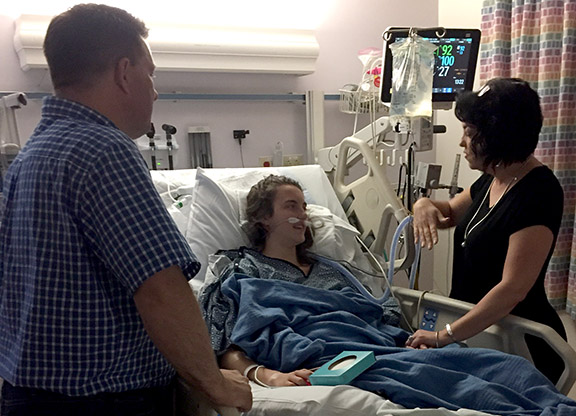 Jeff Hundley (left) and his wife (right) visit Morgan (center) at the hospital.

Jeff was reunited with the young girl, Morgan Newman, the next morning. She was sitting up in bed, smiling and talking!

“I go back to sitting in that training room in Nashville,” said Jeff. “You played the video of the lady that had to use the AED for the girl playing volleyball, and you said something like ‘Guys you never know when you will need this training’.”

He credits his EMS Safety Instructor Trainer Andrea Nash with having a hand in saving Morgan’s life. “I am so thankful for people who love their job enough to do it right!”, said Jeff.

EMS Safety has awarded Jeff with our SHINE (Special Helper in an Emergency) Award. Without Jeff and the other bystanders’ willingness to take action, Morgan’s story could have ended much differently.