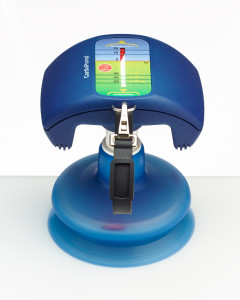 One of the most significant advances in CPR is here, and it started with a plunger. On March 9th, 2015, the FDA announced the approval of the ResQCPR System, which consists of 2 devices which are used together to treat non-traumatic, out-of-hospital cardiac arrest.

The first device is the ResQPump Active Compression Decompression CPR Device. While it’s a mouthful to say, the device is pretty simple. It’s a modified plunger. The ResQPump has a double-grip handle which attaches to the patient’s chest with a suction cup. Rescuers push down to compress and lift for decompression. Decompression actively lifts the chest and expands it.

Expanding the chest beyond the passive recoil of normal CPR improves blood flow. Active decompression creates a vacuum that refills the heart with blood, draws air into the lungs, and lowers intracranial pressure. Put all of that together, and blood flow to the brain is substantially improved during CPR.

The other device is the ResQPod 16.0 Impedance Threshold Device (ITD). The ITD is attached to a bag mask and can be used with a mask or advanced airway. The device impedes airflow into the lungs during decompression with the ResQPump, increasing the vacuum effect in the chest. When used with the ResQPump, the ITD draws more blood back into the heart and increases blood flow to the brain.

Although each device used individually has shown little effect on patient outcome, when used together, the ResQCPR System could prove to be one of the greatest advances in BLS technology since CPR.

With the ResQCPR System more blood is drawn into the heart (preloading) and delivered to the brain with each compression. Here is a video explanation of how the devices work together.

It all started in 1990 with a young man who saved his father by using a plunger to do chest compressions. After hearing the story, two doctors from the University of California, San Francisco, made a prototype with handles. Fast forward to the ECCU Conference in Las Vegas last year, where we saw a video with EMS providers who were doing field studies. They reported that the devices worked almost too well; some patients even opened their eyes during CPR!

While I may not be ready to put a plunger in my jump bag yet, I wouldn’t mind seeing a ResQCPR System next to our office AED!