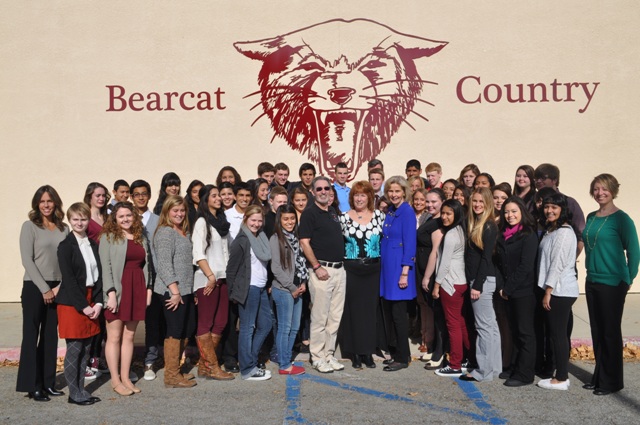 The Performing Arts Center at Paso Robles High School was filled with a standing-room-only crowd on Monday morning as the faculty, administration and PRHS Leadership class hosted a dedication ceremony for the school’s three new Automated External Defibrillators (AEDs). Congresswoman Lois Capps, Paso Robles city dignitaries, school board members, local firefighters and representatives from the Grizzly Academy were among those who showed up to lend their support and pay tribute to a local couple behind the efforts to bring AED’s on campus – Mary and Jerry Winokur.

The Winokurs founded the non-profit Ryan J. Clarke CPR Fund for Schools in 2011 in honor of their son. A Paso Robles native and graduate of Paso High, Clarke died of Sudden Cardiac Arrest (SCA) just three days after turning 30. The Winokurs, as well as their daughter Erin, and Ryan’s father, Ken, are graduates of Paso High as well.

With the help of a few dedicated volunteers, including local firefighters and Grizzly Academy representatives, the Winokurs have taught and certified CPR (cardio-pulmonary resuscitation), AED use and first aid to more than 6,900 high school students, free of charge, throughout San Luis Obispo County.

According to Winokur, there are an estimated 400,000 deaths related to Sudden Cardiac Arrest deaths per year. Of those, at least 14,000 victims are under the age of 18. Based on information obtained from emssafetyservices.com, a website sponsored by the same company that donated the AEDs and through which the Winokurs are certified, the use of an AED within the first three minutes of SCA can increase the rate of survival by over 80 percent.

The site further explains that “the sooner an AED is used the more likely it will work; a victim of SCA losses 7-10 percent chance of survival for every minute after SCA that an AED is not used.” Seconds count when it comes to saving a life and, until the three AED’s were donated to PRHS, no such devices were located in close proximity to the school campus – now, all that has changed.

Principal Randy Nelson emceed the dedication ceremony and explained the location of the new AEDs on campus – behind the reception desk in the main office, in the Agriculture Complex and the gymnasium. “Without the efforts of Mary and Jerry [Winokur] none of this would have been possible,” said Nelson. “They have been tireless champions. As the principal of this high school, I could not be more thankful and proud.”

Noticeably emotional, Mary Winokur thanked all those in attendance for their support and enthusiasm, giving special accolades to her husband and daughter as well as the Grizzly Academy volunteers as she spoke about Ryan and the tragedy surrounding his death. Wanting to prevent others from suffering the needless death of a loved one, it’s obvious that teaching and certifying high school students in CPR, AED use and first aid has now become her passion. “Ryan is my driving force,” she said.

Capps, of California’s 24th Congressional District, described herself as a “longtime proponent of healthcare issues.” Before being elected to Congress she served 20 years as a nurse and health advocate for the Santa Barbara School District. Fully aware of school budget restraints, she has recently introduced the “Teaching Children to Save Lives” bill before Congress which, if passed, will enable school districts to purchase AEDs for their campus sites.

“Paso Robles High School is a model for this bill,” Capps said, “and is truly a frontrunner.”

As she presented the Winokurs with a Certificate of Special Congressional Recognition from the U.S. Congress “in recognition of outstanding and invaluable service to the community,” Capps praised the couple for “translating grief and its downward spiral into something positive.”

At the close of the ceremony, Capps called the Winokurs “the heroes of Paso Robles High School” for all of their efforts as the crowd responded with a standing ovation.